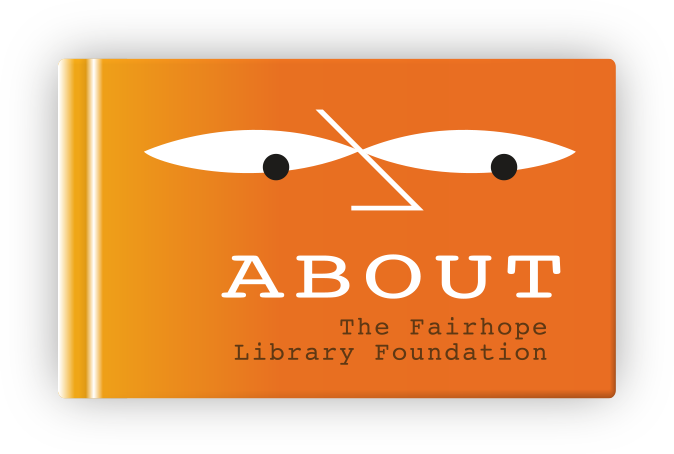 Foundation Board of Directors

Jim Smith read everything he could find in the “airplanes and rockets” sections of every library he could get to as a boy. He eventually became a business lawyer with the Armbrecht Jackson firm in Mobile, where he practiced for over 35 years until he retired. He didn’t grow up to be a rocket scientist, but he never lost his love of reading and gratitude for the libraries that launched him into a fascinating world. He’s known since he came to Fairhope many years ago that the FPL is a special place. Jim and his wife Valery (who spent her childhood summers in the old Summit Street library) share a deeply-held belief that our library is essential to our community.

Chuck was born in Sylacauga, Talladega County, Alabama, where his Dad worked in the marble quarry. As an elementary and high school student he developed his love for the library from spending many hours in the B.B. Memorial Library, where he has served several years as a member of the Library Foundation board of directors. He is a veteran of the U.S. Air Force; retired from a forty year career as a community banker; and is founder and owner of a consulting company. He has a BBA degree from Mercer University, an MS degree from University of Louisville and a Professional Masters in Banking from LSU. He and his wife Carol moved to Fairhope four years ago from Newnan, Georgia, where they were active in creating a Foundation that brought back to life a closed Carnegie Library, which today is a valuable resource to that county seat town. He is an avid pickleball player, serves as Chaplain of American Legion Post 199, and is Dad of Dixie Girl (their 3 year old Shih Tzu dog).

Martin Lanaux, a native of Louisiana, has been a resident of Fairhope since 1977. He has loved books his entire life and is a certified bibliophile. He is president of the Fairhope Public Library Board of Trustees and a former President of the Fairhope Public Library Foundation. His wife Gina was co-owner of Creative Outlet Dance Center in Fairhope for 40 years. She is now a regular supporter of the Library and Foundation as a volunteer.

Reed Coleman moved to Fairhope in 2017, and the Fairhope Public Library was one of her first stops. She is a shareholder with the law firm Hill, Hill, Carter, Franco, Cole & Black, but her proudest accomplishment is easily teaching her young son to use the Library's automated check-out. He's definitely a future Board member. Reed is a voracious fiction reader with an unhealthy devotion to her Goodread profile. She and her husband Ned also enjoy Fairhope's burgeoning food scene and escaping to New Orleans.

Terry Delker is a native Kentuckian. She and her family moved to Fairhope in 2000 to begin the new millenium with warmer winters and water everywhere. A former yoga instructor, Terry found many wonderful volunteer opportunities in Fairhope, including serving on the boards of the Friends of the Library and the Eastern Shore Art Center.

Robin Fitzhugh is a Mobile native who has called Baldwin County home for 17 years. A Spring Hill College graduate with a degree in English and free-lance writer, she has had a life time passion for words, books, and libraries. She is the mother of 4 delightful adult children and spent her working life in non-profit endeavors including religious education, counseling and, most recently, a decade as Director of the Eastern Shore Art Center. Retirement has made time for travel with her husband John and catching up on reading her favorite Southern authors.

Rick Bragg is the author of critically acclaimed and best-selling books All Over but the Shoutin’, Ava’s Man, The Prince of Frogtown, The Most They Ever Had, and Jerry Lee Lewis: His Own Story. A native Alabamian, Bragg said he learned to tell stories by listening to the masters, the people of the foothills of the Appalachians. He also credits public libraries for imbuing him with a love for reading and writing in his youth, when he otherwise would have had scant access to books and the places they took him. Bragg contributes to several publications including Southern Living, where he writes the popular Southern Journal column on the back page. As a national correspondent at the New York Times, he won the 1996 Pulitzer Prize for feature writing.

Tamara Dean is director of the Fairhope Public Library. She moved to Fairhope in 1985. She spent fifteen years in education and has a Master’s Degree in Educational Leadership. In 2001 she began her career with Fairhope Public Library as the Youth Services Director. She earned a Master’s Degree in Library & Information Science, following her appointment to Director, in 2009. Tamara served six years on the Alabama Virtual Library Executive Council, and five years on the Library Services & Technology Act Grant Advisory Council.  Under her leadership the library was awarded, for the first time, the Gold Standard Award, presented by the Public Library Division, signifying the library’s good customer service and community relations.

L’shele Hamilton grew up in Baton Rouge, Louisiana but has lived in Boston, Massachusetts and Portland, Oregon before moving to Fairhope 14 years ago. She has a BS from LSU and an MBA from Suffolk University. Her work experience includes business development, marketing, and sales for both for profit and non profit businesses. L’shele enjoys cooking, spending time with friends and family, shopping, being outdoors, and finding a great story.

Mark Johnson lived in tiny Luling, LA as a young boy and fondly recalls what a big deal it was when the Bookmobile came to his neighborhood, opening new worlds to him. He graduated high school in St. Louis and attended the University of Colorado, earning a BA in English. To burnish his writing skills he freelanced for a Colorado Springs newspaper and the national Rodeo Sports News (which enabled him to pass himself off as a "rodeo bull writer".) Eventually, he grew up (a little, thanks to wife Nancy) and began a real career in nonprofit fundraising at the Pikes Peak United Way, which led to CEO posts in Waukesha, WI and Mobile. After more than two decades with United Way, he switched from CEO to COP as a 50-year-old rookie at the Mobile Police Department. He was 12 years a cop on the mean streets of Mobile; his miraculous survival produced the penultimate (one hopes) message from Beyond: quit while you're still in one piece, move to Fairhope, and write about it. "Apprehensions & Convictions," his police memoir, came out in 2016; his first official act as a Published Author was to present a free copy to the FPL, which was graciously accepted by bemused (and amused) library staff.

Skip is native of Mobile. He graduated from Washington & Lee University in Lexington, VA, and spent the following several years in Washington, DC. Since 1995, he has been a homebuilder on the Eastern Shore. Most of his projects have been in Fairhope and have included several extensive historic remodels.

His spare time over the past several years has been devoted to the restoration of a 1936 Biloxi-built shrimp boat and the building of two smaller boats.

Skip is married and has three children and nine grandchildren. He and his wife, Barbara, live in Fairhope.

Martha Monckton was born & raised in Ohio and made the move to sunny, warm Fairhope as soon as she could after graduating from Bowling Green State University, OH. Relocating frequently throughout her life, the library was always a welcoming place. So much so, that she has worked in several libraries gaining insight into their workings and needs. She is a reader of various genre of books, reading multiple books concurrently as to obtain as much information & enjoyment as possible.

Ben Murray was raised in Spanish Fort, Alabama. As a child, when he was not outside wandering through the woods or swimming in the bay, Ben enjoyed reading all types of nonfiction works, from Civil War history texts with local context, and Biographies, to The Heritage of Lafayette County Mississippi, containing all sorts of interesting facts about his ancestors and others. Ben graduated from the University of Mississippi with an Accounting degree and then moved back to the Eastern Shore, this time to Fairhope, where he now works as a CPA for a local firm. Having witnessed the transition to the digital age where everything you need to read can be found on a screen; Ben still prefers to read paper copies of anything when it is an option. Ben also recognizes the importance of the Library as not just a resource center but a physical place where the Community gathers, where memories are made by impressionable young minds, and where one might just find inspiration.

Debbie Quinn and her husband are a rare breed, natives of Fairhope and graduates of Fairhope High School.  She’s a retired Registered Nurse and 16 year council member in Fairhope and now the Chairman of the Alabama Trails Commission. Living in Fairhope but working and driving the state, she’s learned to love audiobooks and has so many favorite authors...who could pick just one!  She’s discovering more about the U.S. west coast, too, where both their sons and families live.

Mac Walcott is a founding principal of Walcott Adams Verneuille Architects, earning his Bachelor and Masters of Architecture from Tulane University. He is a member of various state and local boards including the Alabama Board for Registration of Architects; Fairhope Center for the Writing Arts; Fairhope Comprehensive Plan Steering Committee; Fairhope Center for the Arts Council; and the Baldwin County Architectural Review Committee. Part farmer, part beekeeper, part writer, part free spirit, he and wife Gina have three children and a host of farm animals at their Fish River home.

Robert Walker grew up in Mobile and found his love of books as a history major at Birmingham-Southern College. He found that reading and the study of other people and places made the world feel smaller, more interconnected, more relatable, and more understandable. Robert hopes that libraries can help make that same feeling accessible to everyone. After attending law school in Birmingham to do even more reading, he and his wife Kira moved to Fairhope in 2016 to be closer to their families. One of their first errands after unpacking was to sign up for their Fairhope Library cards. Robert is an attorney with the Armbrecht Jackson firm in Mobile, but he still sets aside time each Saturday and Sunday to dive into a good history book, ideally while sitting on a bench near the Orange Street Pier and looking out over Mobile Bay.

Born and raised in Tallahassee, Florida, Randal married an army helicopter pilot and flight instructor 51 years ago and made a home wherever the Department of Defense sent them. In 2012 they both decided it was time to retire, Gil after 37 years in the Army and Randal after 32 years as a teacher. For the first time, they had the opportunity to choose where they wanted to live. They are quite proud of their decision... Fairhope has been an incredible find and they love living here. No more snow-covered driveways to shovel, wonderful new friends, and an incredible, award-winning library are just a few of the pleasure they have found in Fairhope. Randal currently serves as president of the Friends of the Fairhope Public Library and in that capacity serves as an ex-officio member of the Foundation Board. She manages the used bookstore in the library and helps with book donations.